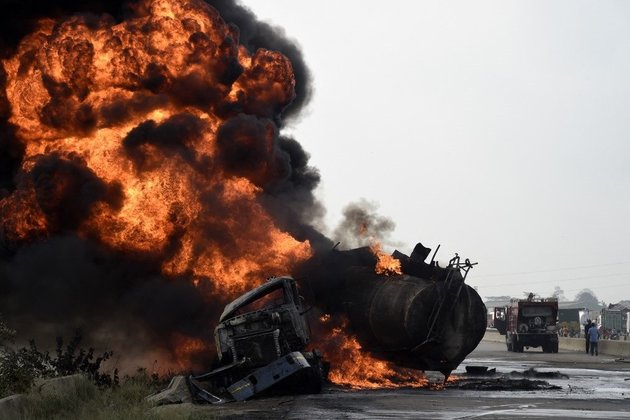 Twelve people were killed and dozens of houses burnt when a fuel tanker overturned, spilled its contents and caught fire in central Nigeria, the emergency services said Monday.

The accident, which occurred on Sunday in the Agatu area of Benue state, is the latest to hit the oil-rich West African nation in recent months.

"Twelve bodies were recovered from the scene of the carnage yesterday, while over 50 houses and shops were burnt," said Emmanuel Shior, the executive secretary of the State Emergency Management Agency (SEMA).

He said many people were also injured following the fire from the crashed tanker, fearing that the death toll might rise.

"Our operatives are still combing the area to determine if more bodies could be recovered from the burnt buildings," Shior told AFP.

He said the tanker had lost control before overturning and catching fire, which spread and engulfed houses and shops in the area.

"The emergency services quickly mobilised to the scene and put out the fire. Everything is calm now," he added.

Fuel accidents are frequent in Nigeria when residents try to siphon off oil or petrol from pipelines or when tanker drivers crash on poorly maintained roads.